The SMARTmoves team facilitated this pre-conference workshop at the 30th Annual International Trauma Conference in Boston in May of 2019. We invited two researchers and the developers of a child treatment model with affinities to SMART to speak at the workshop.

Elizabeth Warner, Alexandra Cook, Anne Westcott, and Heather Finn of SMARTmoves were joined by longtime infant–caregiver dyad attachment researcher and psychologist Beatrice Beebe, Phyllis Booth and Sandra Lindaman representing Theraplay®, and psychiatrist, neuroscientist, and PTSD researcher Ruth Lanius in a wide-ranging panel discussion exploring what they had in common and finding out what they might learn from each other.

SMART and Theraplay® are developmentally grounded, innovative treatments that promote somatic regulation and attachment-building without the need for symbolic language—but each does it a little differently. While Theraplay® develops attachment through the four dimensions of structure, engagement, nurture, and challenge, all under the guidance of an adult, SMART follows the lead of the child, simultaneously attending to regulation, trauma processing, and attachment-building, the central processes of this trauma therapy.

Researcher Beatrice Beebe’s central message was: Never underestimate the relational skills of a four-month-old! Her entertaining narration of a frame-by-frame microanalysis of mother-infant dyads tempered the intensity of the powerful, unspoken transactions playing out on the screen. Her observation that infants with good attachment moved their whole bodies was especially salient for SMART therapists, who are trained to watch for whole-body integration.

Liz Warner demonstrated that coherent narratives emerge from body-based regulation through SMART therapy by offering several examples where movement—through rough-and-tumble play or embodied dramatic play—led to more complex use of language. One young boy whose embodied dramatic play involved insisting that Liz play the “Big Bad Wolf” was able to develop a plan and a sense of “we” that included his caregiver to shift from an earlier developmental stage into organized action. 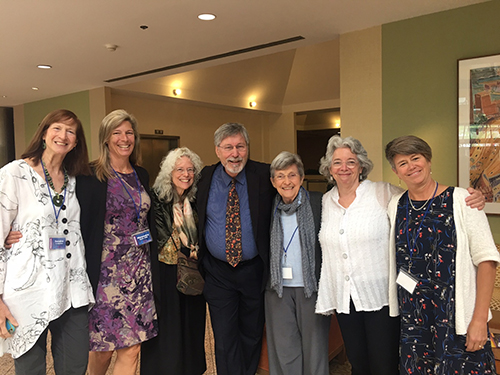 Phyllis Booth and Sandra Lindaman of Theraplay® emphasized interactive repair drawing on Porges’s polyvagal theory, in which the therapist uses their social engagement system to help kids learn to regulate their neurobiology. They demonstrated how Theraplay® slowly brought a young girl who had experienced medical trauma back into connection and conversation with her family and, eventually, with friends. Like SMART, Theraplay® employs aspects of Sensory Integration Occupational Therapy.

Video recording is central to each modality. From a research standpoint, Beebe’s time-series analysis relies on video to capture nonverbal transactions between parents and infants that can’t be detected in real time. Beebe demonstrated how watching video of a four-month-old with her mother could predict secure or insecure attachment later—pointing to the vital importance of adapting treatment models to parent–child pairs at younger ages. Warner showed a video clip of a boy engaged in embodied dramatic play to demonstrate the reparative role of the SMART skill we call Full Participation. Therapists and parents who use this skill by getting on the floor or acting a part in a child’s play are able to create new rhythms of engagement. In Theraplay®, video is a key element of assessment and helpful in achieving buy-in with parents. Lindaman and Booth showed poignant clips of a child at select time points as she reengaged with her environment, her parents, and her peers. Ruth Lanius spoke briefly about “ego motion,” or integrating bottom-up and top-down approaches to promote first-person perspective and agency in the world.

From micromovement analysis to video review of activity in the SMART room and application of Polyvagal Theory, therapists in the audience left the panel discussion with plenty of ideas about how to learn from and apply these embodied, bottom-up approaches to restore to their young clients what they have lost through trauma.