Cutting-edge trauma treatment modalities developed in the U.S. are of interest to our international colleagues. With any treatment, it can be difficult to trust they can be transferable and sustainable; however, our recent success in Norway suggests that SMART, when collaboratively translated with local needs in mind, is both sustainable and an effective child, youth, and family trauma care model.

In early 2017, psychologist Mari Bræin of Norway, contacted me with curiosity after hearing about SMART from a friend and colleague, Kaya Næss Johannsen, who was working in residential treatment. It seemed to them that SMART would fit well with the Bruce Perry’s model, NMT, in which they had been trained. Heather Finn and I had dinner with Mari and Ane Simonson at the Annual International Trauma Conference and discussed SMART as a model for treatment for children and adolescents with developmental trauma who have difficulty with language and symbolically based models. An extended collaboration was born which now will support sustainability of SMART in Norway, and possibly widen offerings to other Scandinavian countries.

Mari works for a governmental organization, the Regional Resource Center for Violence, Traumatic Stress and Suicide Prevention. RVTS-Øst was created in response to the catastrophic events of July 2011 in which a man with right-wing extremist views took the lives of 77 people and injured many more, first in Oslo near the office building of the prime minister, and then on an island where adolescents were attending an annual summer camp hosted by the ruling political party. The Norwegian government recognized the traumatizing and country-wide impact of these events and responded by establishing RVTS to provide resources to address the implicated societal and individual’s problems.

In 2018, the Norwegian therapists were on a mission to find new therapies for children and adolescents impacted by trauma. Under Mari’s leadership, three other experienced therapists, and one sensory integration occupational therapist who had set up a sensory room in a domestic violence shelter for women and children, attended a Boston SMART training hosted by SMARTmoves Partners. They returned home and developed a plan to introduce SMART to Norway by building the first SMART room in Norway in an outpatient clinic called BUP Asker and establishing a study group.

In 2019, RVTS leadership agreed to host a SMART training in English in Oslo if enough enthusiasm was generated. First, Mari cleverly designed and hosted a one-day introductory ‘taster’ to gauge and develop interest among Norwegian therapists. Then, Mari invited Heather and I to provide the first SMART Foundations training in November 2019.

Sixty therapists from the eastern region of Norway surrounding Oslo attended, and energetically experimented and played with SMART equipment while learning the theory, tools, and skills of the model from Heather and I. For an additional day, Heather trained staff at Østbytunet, a residential treatment center outside Oslo, and I trained therapists in Oslo in how to work with caregivers and their children in SMART. After 3 days of training, we were thrilled to be invited to Mari’s family cabin north of Lillehammer with 3 of her colleagues for a weekend of hiking, eating, and making personal and professional connections. Finally, a small group of about 8 therapists followed up with a 10-month long SMART consultation, viewing a film of their therapy sessions in their SMART room as the basis for learning SMART implementation. 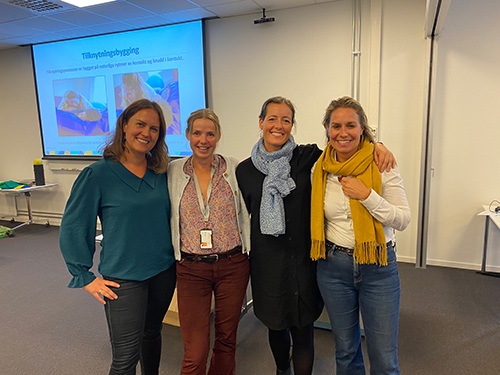 Left to right: Annette Thu Andersson, Mari Bræin, Gry Hustad, Margot von Korlaar
The next phase towards sustainability was to train-the-trainers to be able to provide a SMART training in Norwegian. Four women, Margot von Korlaar, Gry Hustad, Annette Thu Andersson, and Mari, supervised by me, pored over the SMART training slides, questioned meanings and intentions of words and concepts, developed clinical film for teaching, and carefully planned how to implement experiential exercises during COVID. After months of meetings with me and independent, intensive work on their part to translate and plan, the first SMART training in Norwegian was fully booked and held in September 2021 at RVTS Øst in Oslo. I contributed a case study of a long-term SMART treatment for a young child with a history of attachment trauma and his adoptive caregiver to illustrate a complete treatment of developmental trauma over time.

The dinner that Heather Finn and I had with Mari and Ane in 2017 began an international relationship that now is leading to the establishment of more SMART rooms to serve children and teens under child protection who need mental health services in Norway. Indefatigable Mari, in the meantime, will be joining the Center for Stress and Trauma Psychology, building a SMART room to offer more services for children in the Oslo area, and writing an article with her colleagues about SMART in Norway.

RVTS Øst will host a second SMART training in September 2022.

We are proud to have these committed Norwegian therapists as our colleagues and sustainers of SMART.