The vestibular system is the sensory system with receptors in the inner ear that integrates multisensory information and helps us maintain a center of gravity, balance, and a sense of where our bodies are in space. While its most basic function is to provide continuous input to the brain on our body’s relationship to gravity to maintain body position, the vestibular system’s higher-level functions contribute  to having a grounded, integrated sense of self and feeling of agency in the world—capacities that have been lost or largely undeveloped in kids with trauma. 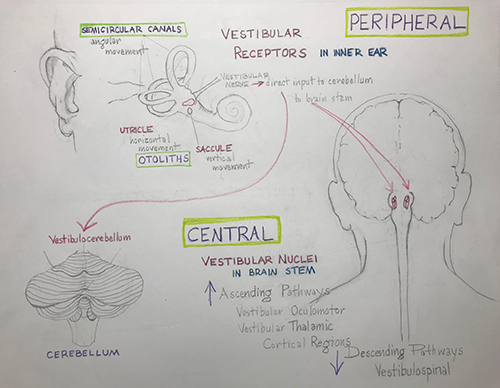 Peripheral and Central Vestibular System © Nancy Muse
Multisensory integration is the underlying principle of the brain. No sensory system operates independently. When kids come into the SMART room and jump on the trampoline, spin on a balance board, roll on the mats, or do somersaults and cartwheels, it is the vestibular system that integrates proprioceptive input from their muscles and joints and tactile input from their skin. Slight movements can be just as effective as big ones, depending on the need. In developmental terms, engaging these inputs gives the child the sense that their body is under their control and working well. This contributes to a feeling of agency—a function often lost after traumatic experience. The relevance of the vestibular system for kids with trauma is obvious: it is difficult to experience well-being if you can’t feel stable on the ground or like your body isn’t working for you. For kids who have either never felt this stability or have had it overturned through traumatic experience, the vestibular system is an extremely useful point of entry for treatment.

Inputs to vestibular receptors in the inner ear are transmitted via the vestibular nerve directly to the cerebellum and to the vestibular nuclei in the brain stem. From the brain stem, vestibular information travels down the spinal cord into motor regions and up ascending pathways to the eyes and head as well as to the thalamus, then widely distributed to the higher cortical regions of the brain. Vestibular-cerebellar connections affect not only motor functions but also cognition and emotion.

Importantly, the vestibular system has a direct effect on autonomic regulation. We are all familiar with the “fight or flight” sympathetic nervous system response and its correlate, the “shutdown” response that belongs to the parasympathetic nervous system. Traumatic experience can leave a person with an easily triggered arousal system. The good news is that the movement senses, and especially the multisensory-integrating vestibular system, have the capacity to regulate this arousal, whether upregulating or downregulating is needed. This can mean more intense input through spinning or rolling as well as gentler input from slow-paced swinging or rocking.

Through engagement of the vestibular system, with the right amount of intensity, the higher-level functions of self-awareness, emotion regulation, thought, and language can be brought online in a more integrated fashion, leading to a fuller and more confident engagement in the world and more stable core sense of being. In this way, the vestibular system is instrumental in mobilizing behavioral organization into action—which Ruth Lanius refers to as “ego motion”— from the bottom up.
Menu
close
SMARTmoves
450 Lexington St., Suite 203
Newton, MA 02466
©2022 SMARTmoves, LLC | All Rights Reserved
Powered by Online Presence Care