What is an Exploratorium? Trauma Conference 2019

For attendees of the 30th Annual International Trauma Conference, it was an opportunity to explore what it feels like to be a kid receiving SMART treatment by trying out some of the same equipment we use to help kids become physiologically regulated. Experiential learning is central to the SMART approach, from therapist training to treatment. For the Exploratorium, we converted a corner of the ballroom into an ad hoc SMART room and set it up with physioballs, balance boards, weighted blankets, a large “Walrus” pillow, and two aerial yoga hammocks. We even had a corner of the room devoted to virtual reality (VR) with a choice of two experiences. “Walk the Plank” simulated stepping out the window of a skyscraper onto a wooden plank—really just a length of 1” x 12” lumber lying on top of the carpet—while “theBlu” provided an immersive underwater experience complete with an encounter with a whale.

SMART therapy relies on input from the vestibular, proprioceptive, and tactile sensory systems—as well as exteroception and the more subtle sense of interoception. We asked people to notice shifts in their own bodies and come up with some ideas about how SMART could be helpful to clients all ages.

It was a hit. A few conference-goers were so eager to get started that they went behind the scenes and started setting up the hammocks we had tucked away until time to start. We talked to people about their experiences on the pillows, in the hammocks, and wearing the VR goggles. Here’s some of what they said.

Aerial Yoga Hammock Most people found the hammock relaxing and regulating. It evoked feelings of floating and weightlessness and sensations of being held. One person felt that being in the hammock enhanced her interoceptive awareness, despite the distractions of conference noise all around. A woman who described herself as “normally very anxious” said that, when she lay down in the hammock, “I wasn’t anxious anymore at all; it just went away.” 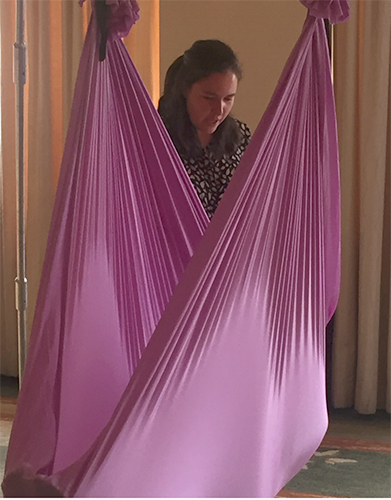 Alyssa Brelsford Supports Participant Swaddled in Aerial Yoga Hammock
Walrus Pillow with Weighted Blanket
A student who asked Heather Finn to have a weighted blanket piled on top of herself as she lay over a huge Walrus pillow commented that she felt “like I was being hugged by the world.” 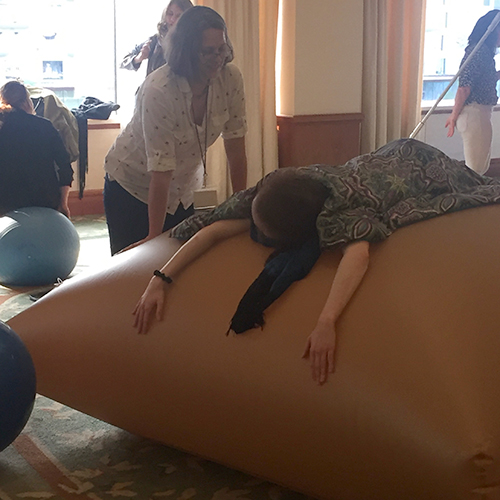 Heather Finn Guides Exploratorium Participant on Walrus Pillow
“Walk the Plank” and “theBlu” Virtual reality (VR) has been applied in mental health settings for years as both a diagnostic tool and a treatment. Our intent was to simulate the types of visceral experiences our clients contend with every day—lack of groundedness, fight/flight, and tenuous relationships to the vestibular sense—to make space for an experiential understanding—but also to spark ideas for how VR can be used in other ways, such as helping caregivers “get” what it’s like.

“I made the guy hold my hand!” exclaimed a therapist who tried the Plank experience to master her fear of heights. With encouragement from friends and colleagues looking on and the support of VR guide Scott Warner, she stepped out onto the “plank” hovering over city streets hundreds of simulated feet below. Someone else successfully “jumped” off the plank by asking herself, “Can I acknowledge what is going on in my body and have dual awareness?” She saw VR as “a cool training tool for people to tolerate distress, work through fear, and retrain the body.” 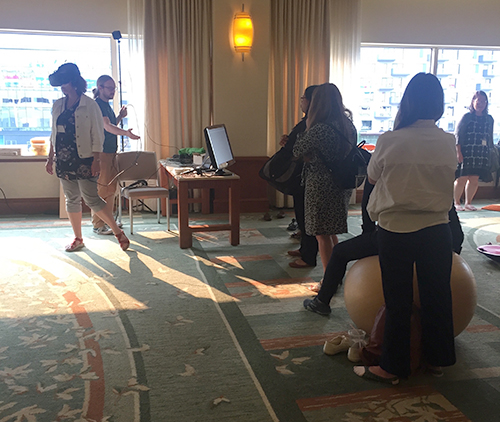 Scott Warner Explains VR to Onlookers as Participant Goes into “theBlu”
Several therapists commented that VR might be a good way for kids to learn to tolerate positive experiences. A therapist who was not able to Walk the Plank expressed having “this interesting little conversation within my own brain between what is logically happening and what is perceptually happening.” Perception won. In the end, she said, “I wasn’t communicating to the rest of my body that I was fine.”

After a terrifying experience with the plank, an expressive arts therapist declared that it was “such a relief!” to be in “theBlu,” which was intended as a calming experience that might help regulate the nervous systems of clients in distress. We see tremendous potential for VR in the treatment of traumatic stress. 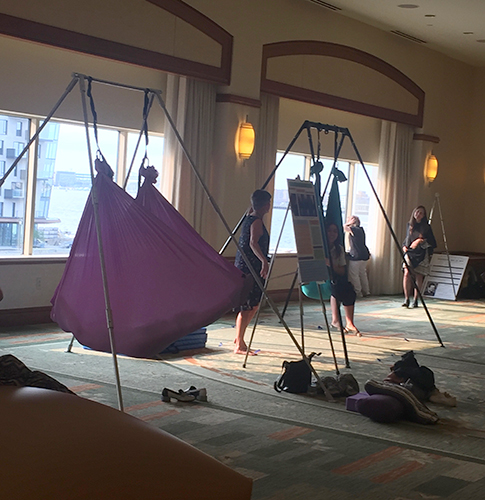 Anne Westcott Conferring with Alyssa Brelsford—Striking the Set after a Long and Successful Day!
Do you have an idea about how virtual reality could help a caregiver, therapist, or other helper feel the child’s experience in a way that would lend itself to more body-based strategies? Or an idea for using any of these modalities with adults? We would love to hear from you.
Menu
close
SMARTmoves
450 Lexington St., Suite 203
Newton, MA 02466
©2022 SMARTmoves, LLC | All Rights Reserved
Powered by Online Presence Care